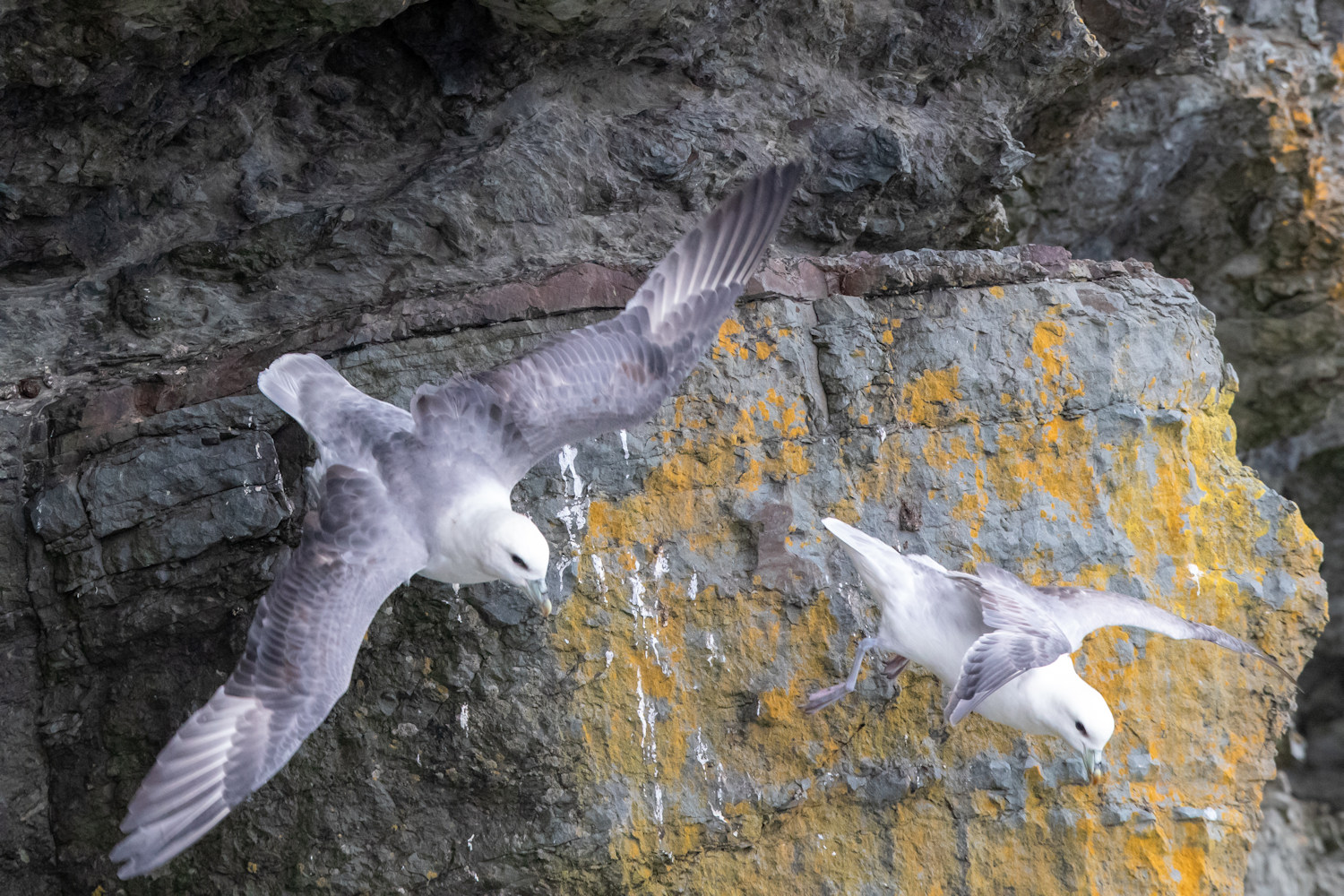 What are the origins of the name?

The name Fulmar is derived from two Old Norse words - fúll = “foul” and már = “gull” refers to the stinking stomach oil it produces.

This has several functions.  Firstly It is an extremely energy-rich food they can regurgitate on the wing as sustenance on amazing long flights as far as 800km. This rich oil is also fed to their young.

Fulmar can also accurately squirt this viscous sticky substance up to three metres as a defence. It can gum up the wings of raptors, causing them to lose the ability to fly and even eventually die. Should a Fulmar be threatened by your presence you may as well forget trying to wash the substance out of any clothing – best to just discard in an outdoor bin!

Before the last islanders left St Kilda, Fulmar oil used to be prized as a healing balm for wounds, medicine for ‘distempers’ and oil for their lamps. They were also food for the table.

At first glance it may look like a gull but a Fulmar actually belongs to the family of Petrels such as the tiny dark Storm Petrel, Shearwaters, right up to the Albatrosses with their 3 metre wingspan.

It is truly pelagic meaning it spends most of the time over the ocean only coming to cliffs on land when it is time to breed. The average lifespan of a Fulmar is around 38 years although there are some claims of them living over 80 years.  They can take 6 to 12 years to reach sexual maturity, are monogamous and these life partners return to the same nest site every year.

Although breeding begins around May, females can delay pregnancy after mating by saving the sperm in special glands. They lay just a single egg which can take seven weeks for the pair to take turns to incubate.

How to spot a Fulmar in flight

The legs are so far back on a Fulmar that it cannot actually stand up properly just sitting on cliff ledges and launching themselves off to fly. When they do fly you can easily tell them apart from gulls as they usually use few fast stiff wing beats and then lock their wings gliding like a small Albatross. Using the updrafts from cliffs Fulmar seem to revel the air currents acrobatically gliding in big racing roller coaster loops, hanging in the wind and even flying backwards sometimes. They often come and check me out circling around my Kayak when I am out on the ocean.

What do they eat?

Fulmar have a particularly sensitive sense of smell and can detect the smell of fish oil rising to the surface of the ocean from several kilometers away.

They eat fish, squid, shrimp, carrion, refuse (including an alarming amount of plastic), jellyfish and plankton. As well as scavenging they can plunge several metres under the water, or feed from just under the surface. 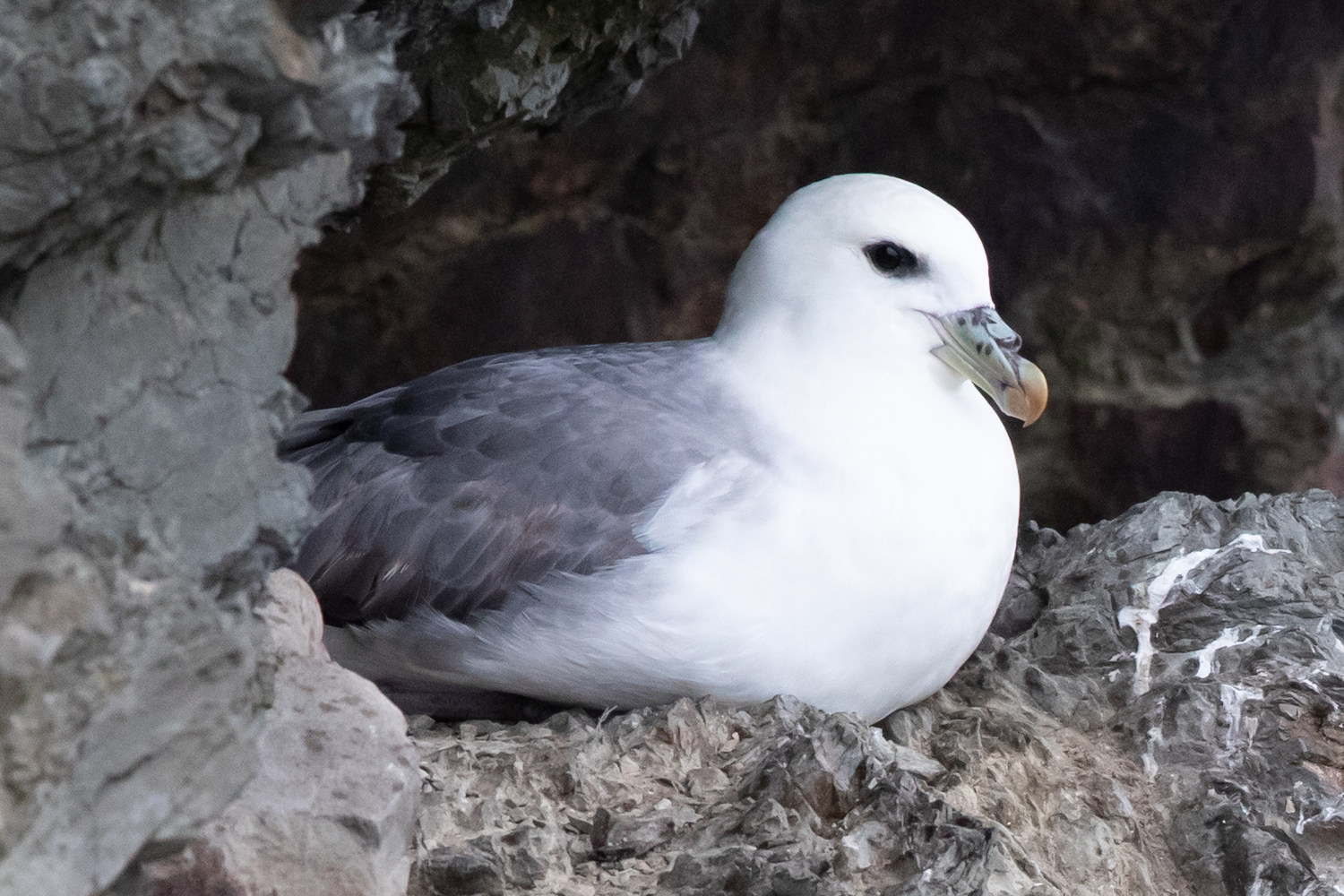 If you carefully observe the beak of a Fulmar it looks like several plates stuck together. The tube along the top is a fascinating construction that collects air into the upper chamber as it flies. It can drink seawater and this "air intake" serves to remove much of the salt and secrete this as a concentrated salty liquid running down the grooves and dripping off the tip of the beak.

Fulmar on a blustery day